Last week was the kind that provides comics like John Oliver and his merry band of satirists plenty of fodder. First, the Senate passed the Energy Policy Modernization Act of 2016, which looks like an unusual example of bipartisan agreement until you notice that S.2012 is an odd, something for everyone kind of bill that manages to avoid mention of climate change while including language about energy efficiencies and support for more pipelines and LNG exports. “All the above” revisited, in other words.

I also plan to keep the champagne on ice for now, despite the grand theater of 171 nations coming together at the UN to sign to sign the Paris accord. As you probably realized, the agreement is nonbinding on signees, a kind of letter of intent. In how many ways does Secretary General Ban Ki-Moon have to remind us: We are in a race against time?

Cue the sun. A lot of people are putting all or most of their eggs in the technology basket, and it is a tempting sell. Last week also saw the first airing of a stunning presentation on nuclear fusion, the ‘holy grail’ of energy, by VICE, HBO’s investigative series. Click on either link and catch Shane Smith chatting with alternative energy rock stars, Elon Musk and Taylor Wilson, who at age 14, achieved nuclear fusion. In his garage. (VICE, season 4, edition 9). Proponents believe nuclear fusion can supply all the clean energy we need virtually forever. 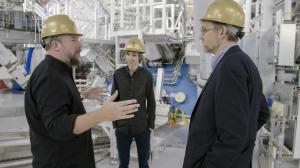 Not to be a party-pooper, but solving for energy doesn’t address how we will feed a population heading to 10 billion when my teenage grandchildren hit middle age. And then there’s the less sexy subject of waste. Although fusion does not produce waste (and may actually convert it to energy), just about all other human activity does. Fortunately, you don’t need to be a nuclear scientist to cut your own contribution to the North Atlantic garbage patch.  And plenty of people are addressing just this. Here’s a cool list of tips, tools and ideas (my personal skim) to consider:

Gadget upgrade fever is how the Fruit and its Silicon Valley peers stay in business. Your iPhone is meant to be replaced in three years, your Mac in four. Surprise!  But you don’t have to play along.  What if maintenance could be the next, next thing?  What if you could learn to love the ones you’re with.  Keeping your discarded electronic gear out of the waste stream is a biggie for obvious reasons.

How to make waste-free living chic and creative? Advice abounds, well-produced blogs on how to eliminate plastic packaging from your life (cloth bags); where and how to shop, prepare and store food with minimal impact (farmers markets, the bin section of your organic HQ, toting your own containers); how to go vintage and practice upcycling.  Zen and the art of maintaining everything. Have fun checking these out. I did!

Going Zero Waste — Kathryn Kellogg. Making your own natural cosmetics, worm bin composting (once you get past the ew factor).

A Small and Delicious Life – homesteading tips by a sustainability and behavior change guru, Ruben Anderson.

No Impact Man Project – what Colin Beavan is up to now that he’s a single dad.

Repurposed clothing on Esty. Much more than artfully slashing your old jeans for a new look.

Thrift Shops in Palm Beach County – Google thrift in your area for a similar list.

LifeEdited – DIY Murphy bed is just the beginning. Sign up for the newsletter. One of the few that doesn’t immediately pepper you with unwanted advertising.

Craig’s List How To Nice of them to give us a hand.

Facebook ‘Virtual Garages Sales’ for your area. As long as we keep moving on and up, there will be lightly used furniture and household stuff available.

Finally, here’s a calculator that shows you where you are now and where/how/how much you could lessen your carbon impact. Wish they had considered the EV in their calculations. http://coolclimate.berkeley.edu/calculator

3 thoughts on “Living Large with Less”